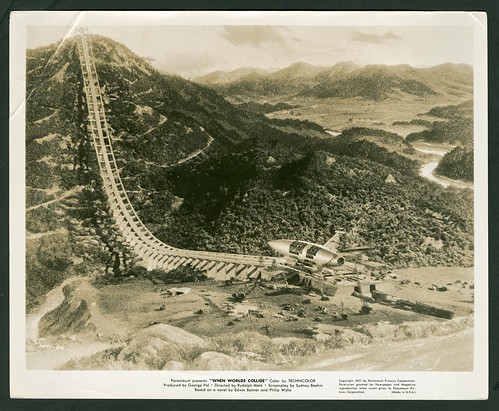 George Pal, the producer of Destination Moon, The War of the Worlds and The Time Machine, had one of his greatest triumphs with this tale of how the best and worst in humanity emerges when the world is coming to an end. The gifted sci-fi artist Chesley Bonestell designed the spaceship seen in this scene card.David Randall is a carefree ladies man and skilled pilot who finds he has been let in on the greatest and most terrible secret in the world when he is paid to deliver some mysterious pictures from one eminent astronomer to another. The recipient, Dr. Hendron, confirms the awful findings of the sender: the planet Zyra will collide with Earth and wipe out all of humanity. Despite widespread disbelief, two philanthropists give Dr. Hendron some of the money he needs to build a rocket ship that will, at least theoretically, take them to Zyra, which may or may not be habitable for humans. The rest of the money comes from Sydney Stanton, a wheelchair-bound old man, who insists he come along, despite the severe limitations on the number of passengers and amount of cargo. Meanwhile, as doomsday approaches, Randall is surprised to find himself in a love triangle with Dr. Hendron’s daughter and her fiancé. Humanity is in peril, and only a modern-day Noah’s ark, and the continued need of a man.
youtu.be/voW0RiNTbGI?t=2s Trailer

Bottom line? WWC is a great sci-fi classic. It strives to explore big ideas with little wallowing to petty drama (unlike many in the B-grade films). It is a must-see of classic sci-fi.