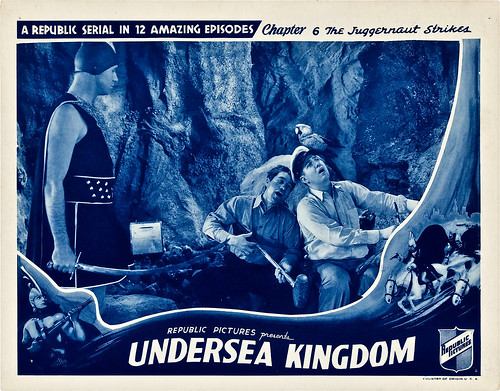 Internet Archive Link for all 12 Chapters
archive.org/search.php?query=subject:%22%20Undersea%20Kin…
In 1966, NTA released Sharad of Atlantis in television syndication. It was a feature edited from the 1936 Republic serial, Undersea Kingdom. Starring Ray "Crash" Corrigan, Lon Chaney Jr., Monte Blue, Smiley Burnette. Directed by B. Reeves "Breezy" Eason.
Starring Ray "Crash" Corrigan, Lon Chaney Jr., Monte Blue, Smiley Burnette. Directed by B. Reeves "Breezy" Eason. Crash Corrigan dives to Atlantis in a submarine with his friends, Lois Wilde, C. Montague Shaw and Lee Van Atta, to save the world from the Black Robes, led by Unga Khan (Monte Blue).
Crash Corrigan, a recent graduate of Annapolis, and Diana, a go-getting reporter, join Professor Norton for a search for the source of a string of earthquakes, Atlantis. They ride Prof. Norton’s rocket submarine searching the sea and little Billy Norton, the professor’s son stows away, of course. When they find Atlantis they are caught in a war between peaceful Atlanteans, note their white capes, and war-monging Atlanteans, note their black capes. After many harrowing moments for Crash, Diana, Prof. Norton and Billy, they barely get away with their lives when they escape a tower of Atlantis raised to the surface for the sole purpose of dominating or destroying the Earth (Which one depends on the compliance of the upper world dwellers.)
Directed by B. Reeves Eason and former editor Joseph Kane, this Flash Gordon imitation was the second serial from a then newcomer in the field, Republic Pictures. Actually, it was only the Republic Eagle trademark that was new; Undersea Kingdom was produced by Nat Levine, formerly of Mascot Pictures, a serial kingdom all its own which had been incorporated into Republic in 1935, lock, stock, and Gene Autry. Not to be outdone by Universal’s blond superhero, Undersea Kingdom had Ray "Crash" Corrigan, crash-helmet and all, diving into the ocean in a fantastic super submarine. Corrigan and his passengers — Professor Norton (C. Montague Shaw), the professor’s young son (Lee Van Atta), brash newspaperwoman Diana Compton (Lois Wilde), and a couple of sailors — are headed toward the legendary sunken continent of Atlantis. Upon arrival, the surface people discover that the recent rash of undersea earthquakes are the work of Unga Khan (Monte Blue), the leader of the evil Black Robes whose nefarious goal is to destroy America. Unga Khan’s kingdom proves to be a mixture of science-fiction gadgetry and medieval derring-do, both the Black Robes and their enemy, the White Robes, dressed like something out of a Wagnerian nightmare. The surface people ally themselves with the White Robes and in the 12th and final chapter, "Ascent to the Upperworld," Corrigan et al. finally manage to rid both worlds of the evil Khan. Republic threw everything but the kitchen sink at the Saturday matinee crowd this time around, including such veteran action and Western players as William Farnum, Raymond Hatton, Smiley Burnette, Lon Chaney Jr., Lane Chandler, Malcolm McGregor, and John Merton. Undersea Kingdom also employed most of the stunt men whose work would eventually help make Republic the pride of Poverty Row: Eddie Parker, Al Seymour, George de Normand, Tom Steele, and the Yrigoyen brothers, Bill and Joe. Undersea Kingdom was also released in an edited feature version, retitled Sharrad of Atlantis.
One of my all-time favorite serials, goofy over-the-top fun that’s hard to beat. Here’s the premise: a series of devastating earthquakes are investigated by kindly old Professor Norton, who theorizes that they are somehow being caused by the legendary sunken continent of Atlantis. Luckily, the prof has invented an amazing new super-submarine and he goes to check things out. Unfortunately, his party consists of two goofy stooges, a colorless girl reporter who tags along, and his little son Billy (a thrill freak who stows away). On the other hand, he’s sharp enough to also bring along the very athletic and tough Naval lieutenant Ray "Crash" Corrigan, one of the best guys to have at your back in a cliffhanger.

Things get weird awful fast. The sub is drawn into a cavern ten thousand feet below the surface and here they find a lost world. Yes, in a cave deep under the ocean is the land of Atlantis, complete with sunlight and a wide open sky and trees and all that. The Professor doesn’t even try to explain this, and frankly, neither will I. You just have to go with it. Atlantis is in theory ruled by the kindly high priest Sharad (finally! a decent high priest), but there is also this usurper named Unga Khan.

Although everyone else is still riding in chariots and fighting with curved swords, Unga Khan has an impressive array of advanced technology. Robots (called Volkites for some reason), flying torpedoes and death rays, an armored tank called the Juggernaut, television spy cameras, everything except Gameboys. Being one of those mad conquest-hungry types (as his name suggests), Khan is determined to bring his metal tower to the surface like a missile and launch an all-out attack on the world above.

Right off the bat, Unga Khan brainwashes Professor Norton to help him with his schemes. Crash Corrigan objects strenuously and we’re off on a wild barrage of attacks and deathtraps and wrestling matches and explosions…. all the things that are great to enjoy if you’re sitting comfortably on your couch instead of being in the middle of it all. The serial is full of memorable moments, but you really have to love the scene where Crash has been tied to the front of that Juggernaut thing. Behind the wheel, Lon Chaney (of all people) as the brutal Captain Hakur gives him one more chance to co-operate or he’ll ram the tank right through the city gates with our hero on the front bumper. Clenching his teeth and speaking with absolute conviction, Crash says, "Go ahead and RAM!" That’s the spirit, Corrigan.

It’s kind of obvious that UNDERSEA KINGDOM was Republic’s response to the successful Universal epic, FLASH GORDON. I mean, "Flash Gordon" – "Crash Corrigan", say them quickly together. The basic plots were the same, but although I thought UNDERSEA KINGDOM moved a bit more briskly and had better action than FLASH GORDON, there were a few areas where the second serial suffered in comparison to its inspiration. Monte Blue was okay as Unga Khan, giving his lines a lot of zest but he certainly was no match for Charles Middleton as Ming. (Now there was a villain who ranked with Fu Manchu and Professor Moriarty.)

Also, Lois Wilde as pushy reporter Diana makes no impression on me, and apparently Crash wasn’t too smitten with her, either. Although most of the cast (including Crash) get to run around in bizarre tunics and crested helmets and flashy robes, Diana stays in her drab professional skirt & jacket ensemble. Compare her with Jean Rogers as Dale Arden in those teeny outfits that still cause testosterone surges in male viewers. Actually, most of the comraderie was between Crash and little Billy Norton, who idolized the big lug in a completely straight, non-suggestive kid brotherly way. Billy even got to save the day a few times, which was more than Diana or the brainwashed professor did.

The biggest misgiving I have about UNDERSEA KINGDOM is that it cheated shamelessly on some of the chapter endings. You see someone clearly drop down an elevator shaft, tumbling roughly to doom; and then next chapter opens with that person catching a projection right after falling in. Boo! Hiss! I can forgive some dodgy solutions to cliffhangers but outright cheating riles me. Showing the hero finding a last minute way out of the burning building or even just leaping out of the car before it blows up is okay, but showing events completely different from what we saw the week before just isn’t playing fair.

Crash Corrigan (1902-1976, real name Raymond Bernard) makes a splendid hero. Obviously in terrific shape, he really seems like he can wrestle down two big men at a time and he delivers his lines with conviction. He would not have been a bad choice to play Tarzan or Hercules. Although Corrigan made a lot of Westerns, that’s really not my field of interest (maybe someday) and I know him better for all his appearances in that inimitable gorilla suit – in fact, as the horned apelike Orangapoid, he gave Buster Crabbe a rough tangle in FLASH GORDON not long before UNDERSEA KINGDOM. Twenty years later, he played the murderous Martian creature in the very cool drive-in classic IT! THE TERROR FROM BEYOND SPACE, often cited as an inspiration for the ALIEN movies.

Barnes scores with the finger roll