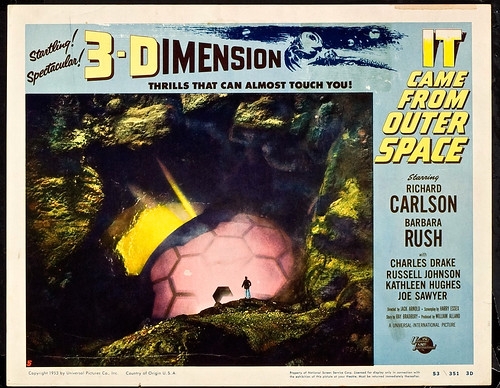 Lobby Card (11" X 14")
Based on a Ray Bradbury novel, this film starring Richard Carlson and Barbara Rush was directed by Jack Arnold and is still considered a sci-fi classic. Featured here are three of the best and most coveted cards in the set–the cast shrinking back in horror on the title card, an image of the pivotal moment the alien space ship is first discovered, and a beautiful portrait card of Carlson and Rush.
youtu.be/h8NI5GWczR0

Director Jack Arnold masterfully brought Ray Bradbury’s science fiction tale to life in this, Universal’s very first 3-D feature film. It was the perfect format for roaring avalanches, hovering helicopters, and zooming space ships, magnifying the effect for mesmerized movie goers.On a beautiful evening in Sand Rock, Arizona amateur astronomer John Putnam and his girlfriend Ellen Fields see a fiery ball fall from the sky into the desert. They investigate and John sees a spacecraft of sorts and is convinced something is inside. A rockfall buries the ship before any one else can see it and now no one will believe him. He becomes the butt of local jokes when the newspapers pick up the story and Sheriff Matt Warren thinks he’s mad. When two locals, Frank Daylon and his employee George, begin to act strangely John is convinced that they have been taken over by an alien being.
This collaboration between science fiction giant Ray Bradbury and director Jack Arnold remains one of the most intelligent and revered science fiction films of the last century. After a spaceship crashes near a sleepy desert village, the townsfolk begin to act strangely and a local astronomer (Richard Carlson) and his fiancee (Barbara Rush) investigate. This otherworldly one sheet features the classic "giant eye" imagery associated with the film and attempts to depict the "3-D" effect.
It came… (ICFOS) is one of those lesser known 50s sci fi films which really deserves to be better known. On a surface level, ICFOS has good pacing. Director Jack Arnold (who would direct several other big 50s sci fi films) does a good job of keeping up the intrigue and tension. Even when the movie is over, the overall effect is more thoughtful than most B-films. It helps that the screenplay is an adaptation of Ray Bradbury’s "The Meteor." All this helps ICFOS rise above the average 50s B movie.

ICFOS was filmed for the 3D, which was all the rage in the early 50s, but works perfectly well in 2D. The overall story is step up too, rising above the typical Cold War cautionary tale. Instead, it’s an introspective about mankind, both our strengths and weaknesses when facing the unknown. This is rather cerebral stuff for a B-film.

Plot Synopsis
A meteor crashes in the desert night outside of Sand Rock, Arizona. Astronomer John Putnam (played by Richard Carlson) investigates. In the impact crater, he finds sees the hull of a ship with its hatch open. No one believes him, because a landslide covered the hull. Putnam discovers that various town folk have been "taken over" by the aliens. A couple of the possessed folk tell Putnam that they mean no harm. The sheriff eventually believes him when spouses also report odd behaviors. The aliens capture Putnam’s fiancee, Ellen, which provokes the sheriff into raising a posse to confront the aliens. Putnam gets to the crash site first and confronts the aliens in the abandoned mine. They say they mean no harm, but crashed on earth by mistake and just want to repair their ship and leave. Putnam convinces the aliens that only by releasing the real townsfolk will the posse by appeased. They do, and it works. The aliens finish repairs to their ship and fly off in a shower of sparks.

Seeing some familiar faces is fun. Richard Carlson starred in Magnetic Monster is great as the stalwart but misunderstood hero. Barbara Rush who starred in When World’s Collide plays Ellen very well. She’s no mere cheesecake. Russell Johnson, who will feature in many future sci-fi films, plays George, the first person "possessed" by the aliens. All of the actors do a good job.

Arnold introduced a fun first in ICFOS: the alien point of view — this was made unmistakable by our looking through faintly reflected moist cycloptic eye and oddly Darth Vadar-like breathing sounds. At other times, we whisk along the telephone wires watching the cars of people about to be confronted by the aliens. (apparently, they can ‘transmit’ themselves) This is a stroke of genius for the story line. It prevents the audience from forming the usual "us versus them" mindset typical of monster movies, such as in The Thing (’51).

Also fun is the strengthening of the alien-possessed-person plot device. We saw it first in The Man from Planet X (’51) in a similar capacity of people helping the alien work on his ship. Those folks weren’t really possessed so much as under mind control. In Invaders from Mars(’53), people were also taken over to help the aliens. In ICFOS, the possessed are actually duplicates, not the originals under remote control. This pushes the concept into new ground.
Un-human aliens — The aliens in ICFOS look a little hokey when you get a good look at them, but that’s not important.

This is a B-film, after all. What’s notable is that the aliens are very different. They’re not humanoid. The Man from Planet X was small, but still a humanoid shape. The Thing (1951) was big, but still a biped with a head, arms, torso, etc.. The martian in Invaders from Mars was less humanoid, being a big head with six little tentacles, but it still had a very human face. ICFOS may have the first radically non-humanoid alien life forms. They were big, potato-like creatures with one large eye and wispy frond-like appendages. This was a significant moment in sci-fi movie history. Aliens could be totally weird and not just people dressed up in hoodies with lighting bolt logos on their chests.

The Message — ICFOS has a definite moral to the story. Mankind is not all that grown up and sophisticated. The alien tells Putnam, ""Let us stay apart, the people of your world and ours. If we come together, there will only be destruction." This is more true for the aliens as at least two of them die. (fake-Frank and fake-Ellen), but interestingly, no humans are actually harmed. Putnam later says to the sheriff for why the aliens don’t show themselves. "They don’t trust us…because what we don’t understand we want to destroy. That’s why they hide." Message: mankind isn’t mature enough for the stars. Yet the tone isn’t too pessimistic. As the crowd watch the ship fly away in a shower of sparks, Putnam says, ""Well, they’ve gone. "it wasn’t the right time for us to meet….they’ll be back."