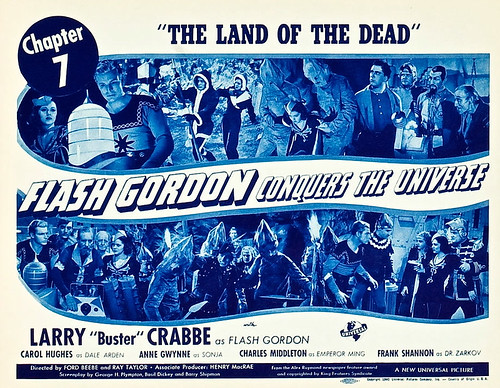 Flash Gordon Conquers the Universe is a bracing, dazzling movie serial, 12 chapters of nonstop action that are as entertaining today as they were in 1940. The movie’s visual appeal is still startling, its action taking place in settings that mix 19th century European opulence with spaceships and other futuristic inventions. The cast — including Larry "Buster" Crabbe, Frank Shannon, Charles B. Middleton, Anne Gwynne, Roland Drew, Carolyn Hughes, and Don Rowan — were at the peak of their powers as performers. Yet even beyond these attributes, Flash Gordon Conquers the Universe also offers a unique mix of mythic imagery and 1940 topicality. Each of the three Flash Gordon serials reflected elements of popular culture sensibility and contemporary history that were unique to the particular time in which it was made. The first, Flash Gordon (1936), depicted Emperor Ming as a Fu Manchu-type character, with a distinctly Oriental appearance, both personally and in the design and costuming of his court. The second, Flash Gordon’s Trip to Mars (1938), offered such conventions as the wisecracking reporter (Donald Kerr) and the presence of a Martian adventure at a time when the notion of possible life on the fourth planet was starting to be discussed widely (a period culminating with Orson Welles’ infamous War of the Worlds radio broadcast).
The third serial, Flash Gordon Conquers the Universe, reflected the world of 1939-1940; in place of the Oriental robes that he wore in the first serial, Emperor Ming (Charles B. Middleton) now wears a European-style uniform cut along military lines and he employs stormtrooper-type soldiers in his attempt to conquer Mongo. The various kingdoms of Mongo now seem like an array of Central European-type duchies and principalities, and Flash Gordon (Larry "Buster" Crabbe) is the bold, impetuous Earth man who arrives to help lead them in their struggle for freedom while protecting his home planet. The equating of Ming with Adolf Hitler should have been obvious, but just in case it was missed by anyone, the first chapter includes a pointed mention of Ming’s concentration camps and his efforts to control the thoughts of his captive populations. The whole serial is an allegory about World War II, with Crabbe’s Flash Gordon representing a kind of American Siegfried, arriving to face the would-be conqueror Ming, who now relies much more on science than the magic and mysticism of the earlier movies.
The serial also reflects a growth in the role of women in chapterplays of this type. Often presented as little more than a reason to put the hero in jeopardy, heroines in 1930s serials walked a tightrope between being necessary characters and plot impediments, especially in the eyes of the usual majority audience for serials: pre-adolescent boys. In the first Flash Gordon serial, Dale Arden (as portrayed by Jean Rogers) didn’t have much more to do than scream and faint while looking pretty enough to convince us that Ming the Merciless would go to any lengths to possess her. Four years later, in Flash Gordon Conquers the Universe — a serial that was aimed at a slightly broader audience than the usual chapterplay (it ran in major downtown theaters and was seen by some adults) — and Dale (as portrayed by Carolyn Hughes) is shown piloting a spaceship in battle, quite capable of defending herself, and presenting a potential threat to Ming — even as his prisoner. All of those elements, coupled with lush costuming and decor, in addition to the most glorious music score ever heard in a serial (largely derived from Franz Liszt’s "Les Preludes"), resulted in an intensely complex and satisfying aesthetic experience, as well as a very diverting four hours of action.
Ironically, Crabbe himself never thought much of Flash Gordon Conquers the Universe, mostly because he objected to the producers having "cheated" in chapters two and three, in which they used large sections of stock footage from the 1929 German film The White Hell of Pitz Palu (scenes that, strangely enough, very probably included long shots of Leni Riefenstahl as an actress). Even that material, however, helped to make those chapters memorable and compelling. The special effects were up to standards, with excellent spaceship sequences (the final chapter, featuring a ship-to-ship escape, is genuinely exciting to this day) and some very eerie sequences involving Ming’s deadly robot army midway through the serial. There are certainly a few flaws — including some very hasty dubbing that is embarrassing at times — but those are isolated moments. Potential purchasers are advised, however, to be wary of unauthorized editions. The copyright on Flash Gordon Conquers the Universe lapsed in 1968, and since then it has come out through various pirate distributors in editions of widely varying quality. The version issued by Image Entertainment on laserdisc and DVD, licensed by the Hearst Corporation (which owns the underlying copyright on the Flash Gordon comic strip), is the best looking edition and the only fully legitimate release of this title. The movie was also re-edited into feature-length films — including the title Purple Death From Outer Space — that convey only a fraction of the majesty of the complete serial. The serial’s title, by the way, is explained in the final shot when Ming the Merciless declares "I am the universe!" As Zarkov explains, having defeated Ming, Flash Gordon has, thus, conquered the universe.

Chapter Titles:
Chapter 1 — "The Purple Death."
Chapter 2 –”Freezing Torture”
Chapter 3 –”Walking Bombs”
Chapter 4 — The Destroying Ray
Chapter 5 — The Palace of Peril
Chapter 6 — Flaming Death
Chapter 7 — Land of the Dead
Chapter 8 — The Fiery Abyss
Chapter 9 — The Pool of Peril
Chapter10 — The Death Mist
Chapter11 — Stark Treachery
Chapter12 — Doom of the Dictator
Amid the political chaos sweeping across the world in 1939, a new terror arises — the Purple Death — and people around the world succumb at random by the hundreds, then thousands, with the identifying symptom being a purple spot on the victim. The authorities are baffled as to the cause or the treatment, and panic is spreading. Dr. Alexis Zarkov (Frank Shannon) determines that the Purple Death is linked to extraterrestrial events. Along with Flash Gordon (Larry "Buster" Crabbe) and Dale Arden (Carolyn Hughes), Zarkov finds an alien spaceship, which they recognize as being from the planet Mongo, home of their old enemy, Ming the Merciless, spreading some sort of dust in the Earth’s upper atmosphere. Flash, Dale, and Zarkov head for Mongo, where they discover that Emperor Ming (Charles B. Middleton), whom they believed had been killed at the end of their battle with him on Mars (told in Flash Gordon’s Trip to Mars), is still alive. He is threatening not only to conquer all of Mongo, but is attacking Earth again, using a "Death Dust" spread by his spaceships that will eventually destroy everyone on Earth.
Flash, Dale, and Zarkov form an alliance with their old friend, Prince Barin (Roland Drew), the rightful ruler of Mongo, who with his wife, Princess Aura (Shirley Deane) — Ming’s own daughter — rules the peaceful kingdom of Arboria, resisting Ming’s military might with their small fleet of ships, the aid of neighboring free kingdoms, and the help of a tiny handful of officers within Ming’s own palace who remain loyal to the prince. Their first task is to secure a neutralizing agent for the Death Dust, which exists in the frozen northern kingdom of Frigia, but before they can do that, they have to free the imprisoned Frigian military leader General Lupi (Ben Taggart), who has been captured by Ming. Flash rescues the general, who is about to be used as the subject of a scientific experiment, and secures the aid and gratitude of the Frigians. This barely slows Ming in his plans for conquest, however, and over the next 11 chapters, Flash Gordon and his friends and allies — including Ronal (Donald Curtis), Roka (Lee Powell), and Captain Suden (William Royle) — take their battle for the safety of the Earth and the freedom of Mongo to the far reaches of the planet. Battling Ming and his villainous henchmen — including Captain Torch (Don Rowan) and Lady Sonja (Anne Gwynne) — from Mongo’s frozen northern wastes to its uncharted deserts, Flash and his allies outmaneuver and generally outfight and outwit Ming’s larger, better equipped army and spaceship fleet, but they are nearly undone by the spies that Ming has placed in Barin’s own household. The bravery of the Earth hero and his friends, and the patriotism and sacrifices of Mongo’s people ultimately prove too much for the evil emperor, who finally faces impending destruction from one of his own fiendish inventions.
Considered by many to be the most elaborate and elegant of the three serials Universal Studios produced starring Buster Crabbe as space traveler Flash Gordon. Beginning with the release in 1936 of Flash Gordon, based on the comic strip created by Alex Raymond, Universal rose to the top of the serial market with this science fiction/adventure chapter play. They followed up with Flash Gordon’s Trip to Mars in 1938 and finally, this chapter play, considered by many to be the best. Flash is now faced with ridding the world of a mysterious malady called the Purple Death which has inflicted Earth courtesy of Ming, the Merciless (Charles Middleton), evil ruler of the planet Mongo.
This serial was based on Alex Raymond’s Flash Gordon comic strip continuity involving Prince Barin and his kingdom of Arboria. Much of the serial’s action also takes place in the comic strip kingdom of Frigia. The movie serial characters of Queen Fria, Count Korro, Gen. Lupi and Capt. Sudin all originated in the strip.
King Features Syndicate released the 3 Flash Gordon serials as well as "Buck Rogers," "Red Barry", "Ace Drummond" and other comic strip cliffhangers to US TV in 1951. Because the television show Flash Gordon, starring Steve Holland as Flash, was in syndication in late 1953, the three Universal Pictures’ Flash Gordon theatrical serials were retitled for TV broadcast. Flash Gordon became "Space Soldiers", Flash Gordon’s Trip to Mars became "Space Soldiers’ Trip to Mars", and Flash Gordon Conquers the Universe became "Space Soldiers Conquer the Universe". To this day both the 3 original "Flash Gordon" serial titles and the 3 "Space Soldiers" titles are used.
In the final chapter before his demise, Ming is looking to escape. In the endings of most serial episodes the hero is is the one trying to escape (then thought to be killed – until the next week). This might suggest another sequel or fourth Flash Gordon serial. However, after 7 December 1941 and the attack on Pearl Harbor, just 3 years after Orson Welles’ infamous ‘War of the Worlds’ radio broadcast simulating an attack from from outer space, the production of "space travel" films were put on hold.
John Hamilton, who plays Flash’s father Professor Gordon, is best known to 1950s TV fans as editor Perry White of Adventures of Superman.