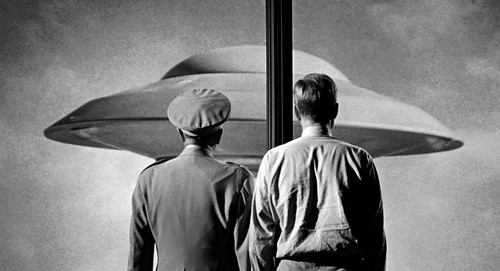 Charles was always cutting out stories from newspapers and in the mid-fifties there were a spat of flying saucer sightings. Charles thought this phenomenon would make a good feature and so Earth Vs the Flying Saucers was the result.
The design of the saucers was based on what most people would expect but Ray added an animated section into the top and underside that also had flutes in them so that people could see it was moving.
The various sizes of saucers (there are seven in total) were made from aluminium by Ray’s father and then anodised giving them a matt finish so they didn’t reflect light.
Ray never liked the latex alien suits used in the film even though he designed them. He would have preferred to animate models of the aliens but because of budget restrictions this was never possible.
Instead of drawing entire storyboards for the action, Ray used location photographs and executed rough sketches on them and then mounted them for storyboards.
As with The Beast From 20,000 Fathoms, a great number of the rear project plates were stills.
For all the aerial model work Ray used old recording wire on which to suspend the saucers.
The miniatures sets – The Capitol and the Supreme Court buildings cost $1500 each and the Washington Monument cost just $500. Compare those costs with today’s budgets
Earth vs. The Flying Saucers (EvFS) is the flagship of 50s sci-fi B movies. It has all the hallmarks of a typical B movie: shot in black and white, much stock footage, low-budget props, etc. That said, EvFS is still the best of its breed. The acting is good (for the most part). Ray Harryhausen’s stop-motion animation of the saucers is great. His saucers have more "life" than any model on a string could attain. The basic premise of hostile aliens invading the earth with flying saucers was a classic. EvFS would be a significant influence in Tim Burton’s 1996 movie Mars Attacks.
Dr. Marvin (Hugh Marlowe) heads a nascent satellite program, but all of his satellites blow up or fall from orbit. A saucer buzzes Dr. Marvin and his wife as they drive to the base. Despite a call from Dr. Marvin’s father-in-law (Morris Ankrum), they launch the next rocket. A saucer descends on the base. Troops open fire. The saucer is invulnerable, but one of the robot-like aliens is hit. The other alien-bots use heat beams to destroy the base. Only Dr. Marvin and his wife escape because they were in a deep bunker. The aliens came from a defunct solar system, intent on taking over the earth. They want earthlings to surrender peacefully so their new home won’t be a ruin from the battle. Mankind is defiant. The aliens give earth 56 days to think it over. The time is used, instead, to develop an anti-saucer weapon. Dr. Marvin and staff develop a magnetic disruptor which makes the saucers unstable. When the fleet of saucers finally arrive over Washington DC, a whole fleet of disrupter-beam equipped Ford flatbed trucks is there to greet them. A mighty battle rages. Saucer heat beams destroy much, but the trucks take their toll too. Saucers wobble and fall into a variety of DC landmarks, including the Washington Monument. Finally, the last saucer falls. Earth is saved! The end.
It’s hard not to enjoy this classic of 50s B sci-fi. It has everything a 50 sci-fi fan loves. The acting is reasonably good, the pacing is pretty good too, so even someone who isn’t a fan of the genre could be suitably entertained.
EvFS is a classic allegory of Cold War tensions. A hostile force seeks to invade and take over. In the mid-50s, the threat from communism was never far from viewers’ minds. The caustic Soviet leader Nikita Khrushchev would say, later in 1956 "We will bury you!" would say later. When, in the movie, the earthlings decide to fight the saucers, an Army general says: "When an armed and threatening power lands uninvited in our capitol, we don’t meet him with tea and cookies!" Such was American popular sentiment towards the threat of communism.
Stock Footage Fun — amid the usual clips of P-80s and V-2s (Checkers!) and other military clips, are stock disaster clips. Storms, fires, destruction. For the sci-fi fan, there are also snippets recycled from earlier sci-fi movies. There are battle scenes cut from War of the Worlds (’53) and The Day the Earth Stood Still (’51).
Cheap Suit — The aliens walk about in crude robot-like suits with faceless bullet-shaped helmets. The fit and finish of these suits is quite poor when you get a good look at them.
Alien Glimpse — The brief scene in which the real alien (head) is exposed, reveals the taxonomy that would become archetypal: big head, tapering to a small neck, large almond-shaped eyes, tiny mouth. They’re also said to weigh little, being fairly weak and frail. Of the many sorts of invading aliens seen thus far in the 50s, some were simple — men in leotards Killers from Space, if not just plain people Devil Girl from Mars and Flight to Mars and giant humanoids: The Thing. A very few hostile (or at least frightening) invaders were not humanoid: Invaders from Mars and War of the Worlds. The alien in EvFS appears to be an early showing of what would later become the presumed "true" shape of alien life forms.
Bottom line? EvFS is well worth watching. Fans of 50s sci-fi will enjoy it. Family members of fans of 50s sci-fi can tolerate it. In many ways, it is the epitome of the B grade 50s science fiction movie.

How to Watch Movies with the Best 123Movies Alternatives