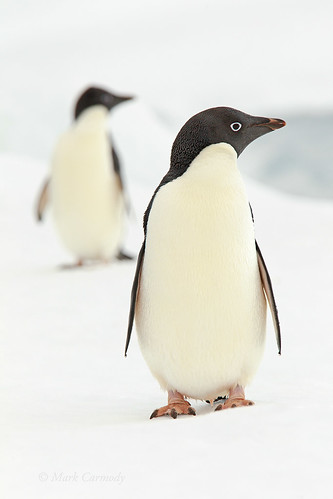 The Adélie Penguin (Pygoscelis adeliae) is a species of penguin common along the entire Antarctic coast, which is their only residence. They are among the most southerly distributed of all seabirds, as are the emperor penguin, the South Polar skua, the Wilson’s storm petrel, the snow petrel, and the Antarctic petrel. They are named after Adélie Land, in turn named for the wife of French explorer Jules Dumont d’Urville who discovered these penguins in 1840.

Based on a 2014 analysis of fresh guano-discolored coastal areas, there are 3.79 million breeding pairs of Adélie penguins in 251 breeding colonies, a 53 percent increase over a census completed 20 years earlier. The colonies are distributed around the coastline of the Antarctic land and ocean. Colonies have declined on the Antarctic Peninsula, but those declines have been more than offset by increases in East Antarctica. During the breeding season, they congregate in large breeding colonies, some over a quarter of a million pairs. Individual colonies can vary dramatically in size, and some may be particularly vulnerable to climate fluctuations.(wikipedia)

This was taken on the Antarctic Peninsula. My favourite penguin species.

The Thing from Another World (RKO, 1951). The story in Screen Captures.

Adelie penguins after a bath